Since my last post, I was sick for two weeks, rode over 150 miles, and completed my first bike race of 2016!

I was pretty devastated to get sick on basically 01/02 and have it continue through this past weekend. It seems as though I've got some shit in my throat still, but it's far more manageable than it was even earlier this week. Hopefully that means I'll be in ship shape for the rest of the season - or at least until the end of the school year.

Even though I'm supposed to be waking up at 5:30 for my trainer rides on Tuesdays and Fridays, I still struggle with the waking up part and end up doing them in the afternoon...or not at all. Bad Andi. Gonna try to go to bed earlier in the coming weeks and see if that helps. I'm one of those lame people that need at least 8 hours of sleep or I'll be a zombie all day. 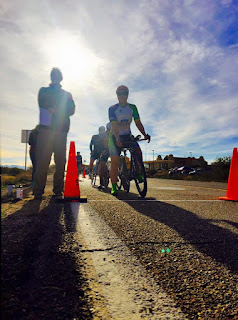 I was psyched to see so many of my old cycling buddies, some of whom I hadn't seen since the summer! I was actually late warming up because I got so involved in talking to people.

Today, I rocked the usual setup - Powertap + disc cover in back and Zipp 808 in front. Wore my skinsuit, Specialized helmet, and shoes. I also borrowed Mike's shoe covers...which are a little worse for wear, but they're aero, and also warmer for the cold morning.

They didn't hold your bike at the start, which made for...an awkward start. I can't say I'm the most graceful clipper, so all of the photos of me at the start line are kinda weird. I'm giggling and scowling...and then sprinting like hell. 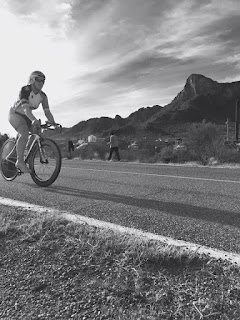 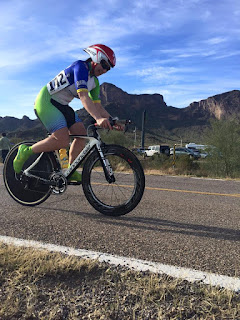 The ride out was probably a little easier than I should have gone, especially the first mile. I knew it was flat rather than downhill, and it's been a while since I've done a steady effort for 20km. I knew I needed to step it up when some dude flew by me going like 35mph. I stepped it up, and it definitely paid off. That tailwind had me going 26 mph for most of it, at one point hitting 29 mph!

Then I turned around. That part sucked. While it was only about 140 feet of climbing in six miles, the headwind was really intense. I managed to hold my speed near 20 mph for a bit, and then after the first mile, I dwindled fast. Trying to keep my heart rate, power, and legs in a safe zone was very hard. At one point, I was hit with a GUST of headwind. I look down - I'm going 250 watts, heart rate skyrocketing to 190, and my speed goes from 14 to 12 mph. *sigh*

After I saw the sign for 5 km to go, I picked my effort up past my comfort zone. The road both flattened out and got bumpier with the older pavement. There were two girls in front of me who I wanted to catch once I saw the start list. Got one of them with just under 1 km to go and was just behind the second one at the finish line.

Averaged 184 bpm, which was low for me...though it is difficult to raise your heart rate on a slightly downhill tailwind without using up all your power. Power was 171 watts, which was 1 watt less than last year's race. I think I'm a slightly better climber than I was last year, especially with the training I've done. However, I seem to leave something to be desired with my threshold. Overall time according to Strava is 38:21, which is crazy slow. I just keep having to tell myself that it was the wind and not me. Even the fast people I know had much slower times than previous years. 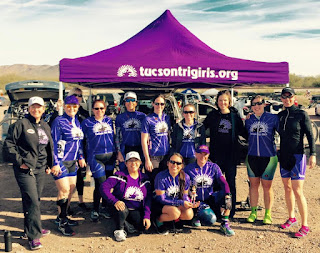 Next weekend is the Santa Catalina Omnium, which includes the BioPark Crit and the Oracle Road Race. The crit should be interesting - I'm really excited to be able to race with a team this year (though it probably means I'll end up being a carrot attack at some point). There's a chance of rain for the road race...and in Oracle, that also means there's a chance of snow. Eek.

Barring any issues, I'm picking up a new pair of race wheels! A friend of mine is giving me a killer deal on a pair of Enve 6.7s. It'll be a nice all-around pair of wheels to use for races, so I'm crazy excited!