I said I wanted to update every month...well I'm two months in instead.

My first FTP test (January 2 or 3, can't remember which) told me that my FTP was at 142. Considering a few years ago when I was just below competitive my FTP was just above 200, this really sucks.

So far for the year, I'm at 407 miles. That's definitely under what I would like to be at, but it isn't horrible. I've been lucky not to get super sick, so that's been nice.

Mid-January I did the UA Crit. This year, it went back to the UA Campus, and included a fairly technical turn right before the finishing sprint. I raced in the women's 4/5 field, and we also raced with the younger junior riders. I got squirrely at the beginning and was dropped by the third corner.

One of the biggest issues I have as a cyclist is that I have decent technical skills, but I haven't had the strength to show it. Throughout most of the race, many of the dropped riders who I caught (or caught me) couldn't hold my wheel around corners (or I would have to slow down behind them). I remember one time a few years ago, that skill got me a prime. Maybe one day it'll get me a win! :P

I ended up dead last. It really sucks, but it was fun to get out there and race.

I've been getting into the Zwift events and races as well. So far I've ended up near the end of my category, but it's been a lot of fun. It's far safer than actual racing, and it costs a lot less as well! My first crit I ended up 11/14 (which was after more than half the field was DQed for having too high of a power to weight ratio for the category they signed up for). Once I fell off, it was fun trying to pick up other riders who had fallen off and trying to stay away from chasing racers. I've also done some time trials and group rides, which are fun. There's a group ride every Wednesday for the Tour of California, so I'm doing that and enjoying trying to push myself and stay with the front group (even though most people are just chilling in the back and enjoying themselves). There's also a sub 2.0 watts/kg group that rides throughout the week, and I've been having fun on their Sunday afternoon rides.

Also, I finally went to physical therapy to try and address the pain I've been feeling since my trip to Sedona in November. What happened was we rented mountain bikes and severely underestimated the skill level required for the trail we picked (in our defense, it was considered an "easy" trail...just for hikers, not cyclists). We ended up having to push 40 lb mountain bikes up a hill on a very narrow trail with a cliff beside us. At one point, the bike slipped away and began to fall off the cliff. I reacted quickly and rescued it. I'm almost positive that was the moment I injured myself. Throughout December and January, I was reduced to laying on the floor at home and work trying to find a way to relieve the pain. I couldn't stand or stay seated for an extended period of time without setting off pain.

My physical therapist, Craig Smith (AWESOME guy, highly recommended) diagnosed me with gluteus medius tendinopathy and trachanter bursitis. He also believed there was a bit of trauma to my spine, but I don't know if he ever called it anything specifically. Essentially, part of my butt and upper thigh was inflamed. I had been doing deep stretching to make things better, but it turned out I was actually making things worse.

Four weeks of PT and my hip is almost back to normal. I tried some deep hip stretches and running as a test, and definitely felt some pain the next day. It sounds like I just need to keep working on strengthening the hip and know when to pull back. It does suck, especially with not being able to go as deeply in yoga, but I hope one day I'll have that hip back to its full potential.

Even though I went through all of that, I was still able to ride. I actually managed to raise my FTP to 162 as of last Sunday!

For upcoming races, I think I'm going to do Flapjack Flats TT and the Colossal Cave RR. I'm a little too busy and under too much stress at work to think about doing the crit, even though it's in the evening. I'm hesitant about Colossal Cave because the women 3/4 do 54 miles now...and the most I've done in the past four months is 35 miles, but I'm going to try a 50-60 mile ride tomorrow AM and see how things go.

Here are some lovely pictures from the past two months: 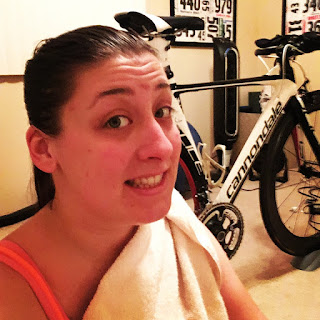 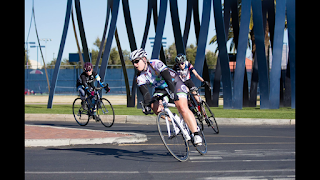 Hitting the technical corner at UA crit without falling over! 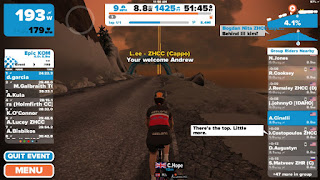 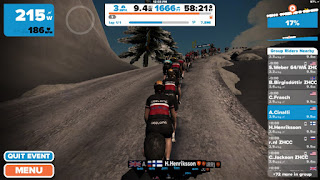 17% grade felt like Gates Pass without the fresh air. 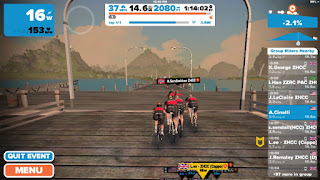 I think I was trying to show my aero position here. 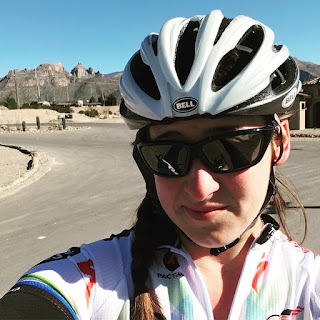 Smirk behind the mountains after breaking off from the Sabino ride to do my own thing.

Much love! I hope to pass on a race report after next weekend! :)
Posted by Andrea Gonzales at 8:09 PM