This weekend was filled with cycling goodness. 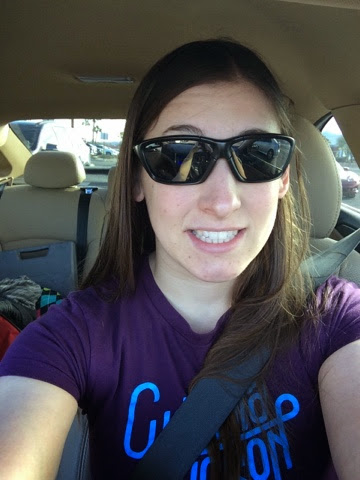 I drove up to Chandler yesterday for the ABRA Race Promoter's Summit. I'm not sure how much I should share to the general public, but there was a lot of stuff discussed that I agreed with, as well as some things I had vehement opposition. One of the big conversations was the race calendar and the tier system used to schedule races. There are some people involved in ABRA who would like to make it so there is a crit season, a TT season, a road race season, and then track starting in June. After a lot of discussion, most of those people seemed to understand why it wouldn't make much sense and instead focused on the idea of having "cornerstone" or "anchor" races such as state champs, VOS, and TBC each month and races pertaining to each leading up to those. It's an interesting idea, and I'm okay with most of what people discussed. As a promoter of a small race who doesn't have a whole lot of interest in turning it into a ginormous $10,000 cash purse event, I want to make sure that I still have a race that will get racers.

The other discussion was on the tier system. What was proposed was that more collaboration and a longer conversation should happen instead of the first-come-first-serve tier structure we have. Obviously, state champs and stage races should have top priority, but maybe make a focused effort to pair Tucson races with Phoenix races (and maybe not a Flagstaff race the week before a Showlow Race, because not too many people want to make a four hour drive two weekends in a row...).

The final thing discussed was something I am completely against. It was brought up that small teams should have less of a vote than big teams. It was interesting to me that the two large teams who really pushed for this have very clear agendas they want to push through ABRA. Hmmmm perhaps that's why they want more votes? Don't want to turn this into a bitchfest, so I'll leave it at that.

Next stop was the WoCAA Party up in Scottsdale! I had some delicious food from Pita Jungle (sadly, I did not drink any of the beer), and got to catch up with some women I haven't seen in MONTHS! It was pretty awesome. Even better, I won a crap ton of stuff from the raffle (you'll notice the free entry for Espirit de She...I may end up giving that away to someone, but we'll see). 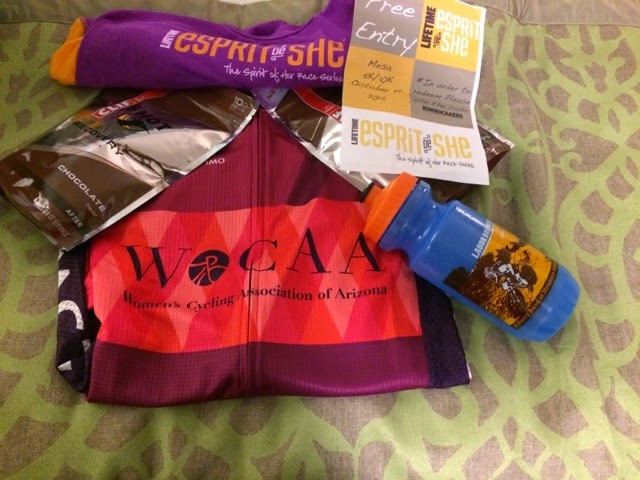 After enjoying some popcorn and peanut butter crackers, I marathoned through some Cutthroat Kitchen in my hotel room and fell asleep.

I woke up around 6:30, and made it all the way down to Picacho. It was quite freezing at the start. Breezy and cloudy. I warmed up on the southbound frontage road, watched the officials deal with some juniors who missed their start time because they had to pee, and was off! 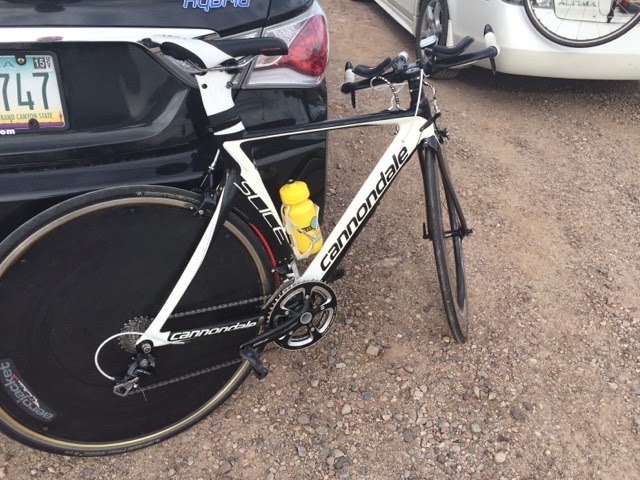 My goal for the tt was pretty simple (and for the most part, was completely well-executed). The first 10km, I'd go just below my threshold. It's definitely a risky move, but it was mostly flat and I had a slight tailwind. This would allow me to conserve energy for the way back, where there was a slight headwind and a little uphill (all in all, we're talking about 150 ft of elevation change). I upped things a bit in between 10-15 km, and then went as hard as I could in the last 5km, especially since it flattens out there. Luckily, I turned around without too much trouble. I unclipped, but didn't step my foot down (I have a tendency to get overzealous in my turns and end up in the dirt).

The part that I hadn't counted on was something I noticed but couldn't place during my warm up. There was a "whoosh" sound that would happen every once and a while. Finally, I realized right after the turnaround that my 808 in front was rubbing my brake pads. We had opened them up pretty wide on Friday, but apparently, I failed to test it when the wheel was on the ground. I  attempted to tt and adjust the brakes one-handed for a bit, but decided to focus on my speed and keep my bike as level as possible.

That last 1 km seemed to take FOREVER. I was going balls out, and had that coppery taste in the back of my throat (which tells me I'm going way too hard). It paid off, and I ended up 5/12 (only two seconds behind 4th place - if only I hadn't taken that sip of water!) at 36:05. It was about 1.5 minutes off from my time two years ago. 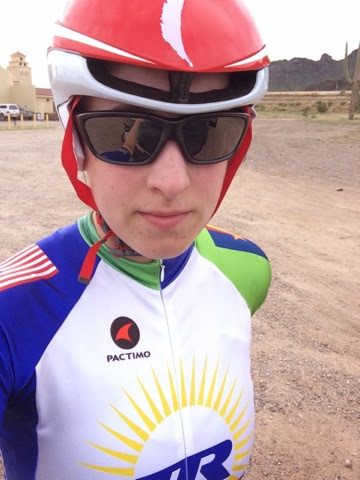 Despite my stone cold face, for the most part, I'm pretty pleased. Racing always makes me want to race more, so I'm considering doing the UA Crit on Saturday - definitely not Oracle RR on Sunday, as I'm not sure how fast I can actually do 45 miles at the moment.

I start my 12 week triathlon training plan. My goal is to really work on my running and swimming endurance. This particularly important, as the swim is 750 meters, which is twice as much as I did in my first tri. All while I'm doing that, I need to improve my cycling road fitness to stand a chance at some of these crits. It should be a very interesting year for sure.